The Volkswagen Transporter's dashboard is challenging due to its very small installation depth, but Alpine is the only manufacturer to offer the option of installing an 8 ″ screen navigation player.

The package includes the Alpine X802D-U player and the KIT-802T5 installation kit.

The installation kit includes all the necessary components, such as the mounting frame and mounting brackets, the CAN bus adapter, the steering wheel remote control adapter and the antenna adapter. A separate “magazine” is also included, which can be mounted on the top of the player frame to improve the readability of the screen in sunlight. 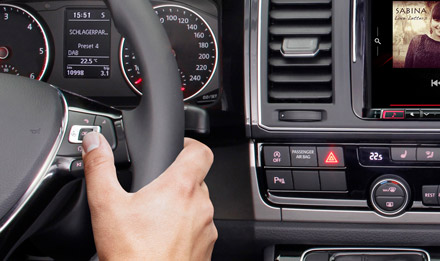 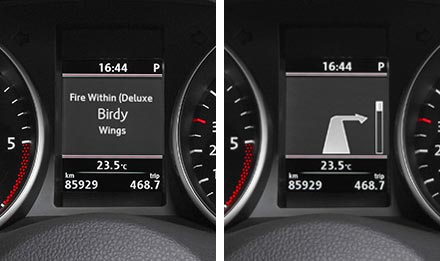 Original screens in the instrument cluster

The instrument cluster display is connected to the Alpine player, so you get the data there as before. For example, you can see the name of the radio channel, songs and artist information, navigation instructions, etc. 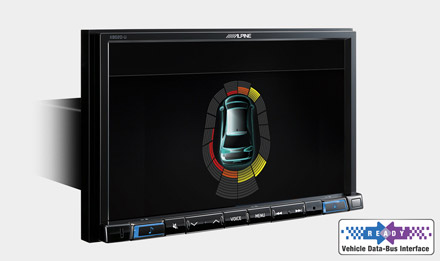 If your car is equipped with a factory-fitted reversing radar, you will not lose this information if you replace the X802D-T6 player in your car. The latest generation of Alpine players display reversing radar data in great detail. 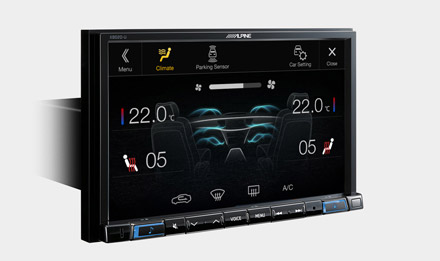 The X802D-T6 displays information for a few seconds when using the air conditioner. The display shows information about the driver's and co-driver's temperatures, seat heaters, ventilation nozzles, etc. 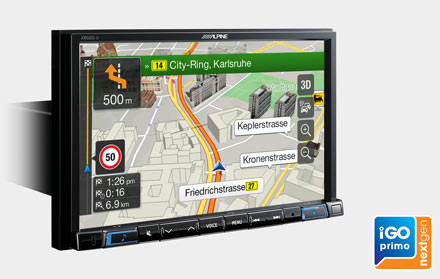 The X802D-T6 has one of the best and fastest navigations on the market built-in. Alpine's powerful processor ensures high-speed route calculation and navigation includes hundreds of thousands of ready-made POIs as well as 3D landmarks. 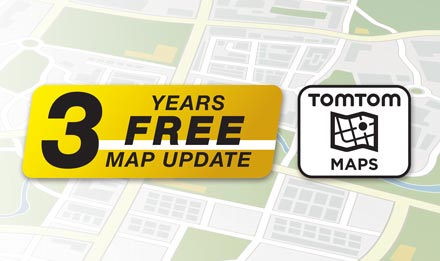 The most important aspect of navigation is its map database. The Alpine X802D-T6 includes maps of 49 countries, which are the responsibility of TomTom. You can update the maps for free for three years through alpine.naviextras.com. After free map updates, updates can be obtained through the same site for a fee. 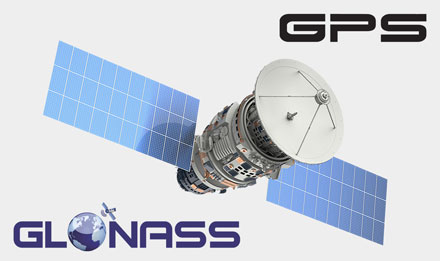 The more satellites in use, the faster the vehicle location is updated on the map and the more accurate the navigation. In addition to GPS positioning, the X802D-T6 uses Glonass positioning, which is especially helpful when traditional GPS reception may be impaired (e.g. near tall buildings or in the mountains). 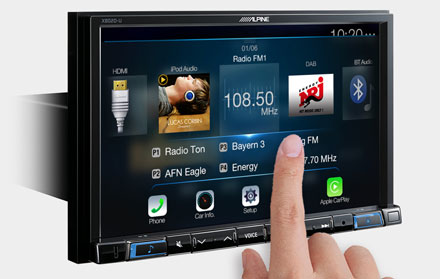 The 8-inch high-resolution WVGA touch screen produces a very precise and detailed image, whether you are watching music videos or using navigation, for example. The interface is really clear and the use is logical. You can also change the color of the player to match the colors of the car dashboard. 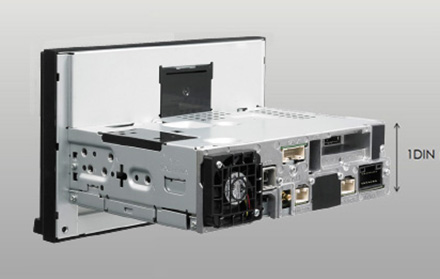 More and more cars have space on the dashboard for a 2-DIN player, but there is so much stuff inside the dashboard that the traditional 2-DIN frame can no longer fit there. The Alpine X802D-T6 eliminates this problem and results in a 1-DIN chassis and a 2-DIN display. 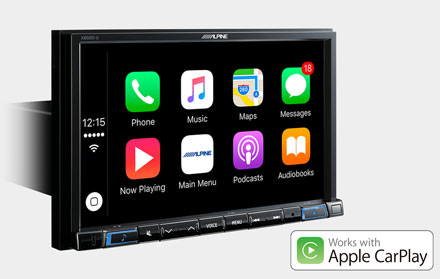 The X802D-T6 is compatible with Apple CarPlay, allowing easy control of the phone on the go. Apple CarPlay gives iPhone users the ability to manage calls, use iPhone navigation, listen to music, and access messaging features. Music features include, for example, the use of Spotify, as well as online radio and podcasts. You just connect iPhone to the player with a USB cable and the CarPlay features are immediately available to you. 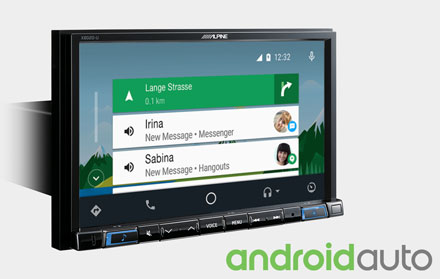 The simple and simple interface keeps your gaze on the road and the functions of the phone are really easy to use. Android Auto automatically displays all the most interesting information on the player screen and organizes them into cards on the screen. Apple CarPlay and Android Auto use the X802D-T6's navigation antenna for the best possible satellite reception.

NOTE! Android Auto is not available in the Google Play Store, so you will need to install the app in a different way. 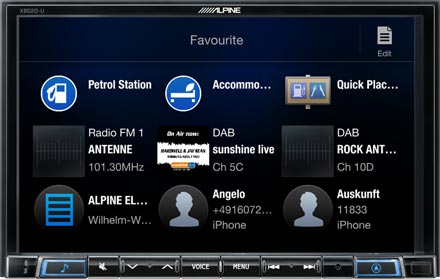 For example, you can use Favorites to get your most frequently used navigation destinations, phone numbers, and radio channels. Just press the Audio button for a second and all the most important items are at your disposal. 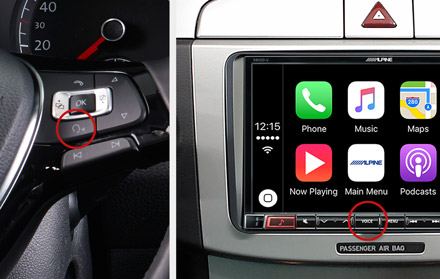 Press the VOICE button on the player to activate SIRI or OK Google. You can make a call, enter a navigation destination, send messages, or say a playlist with voice control - just to name a few features. So you can use the player without taking your eyes off the traffic. 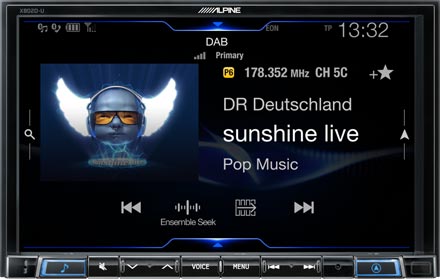 The built-in DAB / DAB + / DMB tuner uses the most advanced digital technology in radio reception and produces completely noise-free and interference-free playback. DAB + also offers a number of additional features compared to traditional FM radio: You can select radio channels from a much larger selection and you can also search for channels by channel type or alphabetical order. DAB / DAB + / DMB are not used in Finland.

You can connect a USB stick or an external hard disk from which you can play audio or MP4 video files. The X802D-T6 is also equipped with an HDMI input, to which you can connect, for example, an Alpine DVD player DVE-5300 or any other external device with an HDMI output. You can also connect your phone to the player with a separate HDMI adapter, which lets you import video files from your phone to the Alpine display (HDMI adapters sold separately). The X802D-T6 also includes an HDMI output for an additional display, for example.
Note: The HDMI output is an “extension” of the HDMI input, so USB, CarPlay or Android Car playback cannot be exported to the HDMI output. 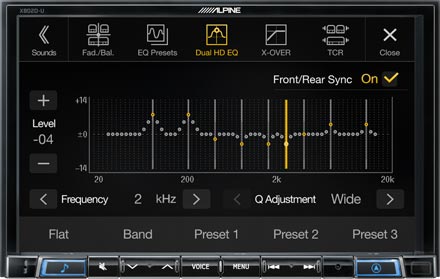 The X802D-T6 includes the BASS ENGINE SQ, which offers a wide range of adjustment options such as digital time delay controls, digital crossover filters and a nine-band equalizer. Best of all, you can make adjustments on your own phone using the Alpine TuneIt app (iOS and Android). You also have Media Xpander, 24-Bit D / A converters and 3 pairs of four-volt line outputs. 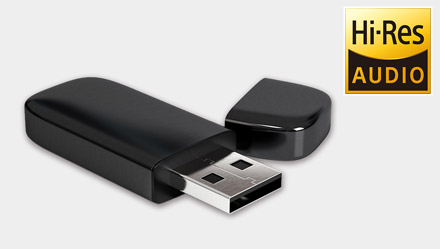 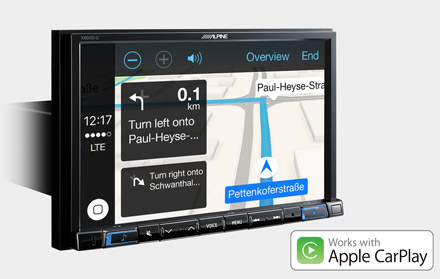 Apple Maps provides you with guidance to your destination with turn-by-turn guidance that is back and easy to follow on the X802D-T6's large screen. Large icons and arrows on the screen, as well as auto zoom, make navigation easier. Are you looking for a gas station, restaurant or other interesting thing on your trip? You can easily select a waypoint for your trip and see all the points of interest nearby, as well as time estimates of how long it will take to deviate from the original route. When you press the navigation button at the bottom of the player, Apple CarPlay navigation launches directly, without a separate menu adventure. 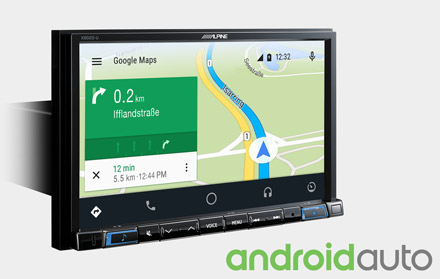 Let Googlemaps guide you. You get voice-guided navigation with real-time traffic information, lane guidance, and many other great features. Whether it's the phone screen or the image projected on the player, the interface is really simple thanks to the large buttons and the driver is able to focus on the most basic thing, ie driving. The X802D-T6 works seamlessly with Android Car and Google Maps, and uses an Alpine external antenna for navigation for the best possible satellite reception.

NOTE! Android Auto is not available in the Google Play Store, so you will need to install the app in a different way. 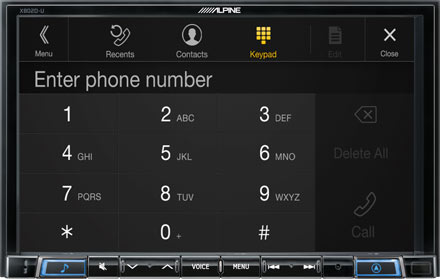 Built-in Bluetooth® provides wireless connectivity between your phone and the player. In addition to a simple and clear interface and hands-free functions, you can get speed dials to the most frequently dialed numbers from the phone. So you can listen to what Spotify and online radio have to offer and see artist and song information on the X802D-T6's screen.

Compatibility with your car

If your car has a reversing radar, you will get its information on the Alpine display. Alpine offers a wide range of car model-specific adapters that allow you to use the car's original steering wheel buttons *, display air conditioning information on the X802D-T6's display *, and parking radar information *. You also get navigation guidance arrows on your car's dashboard display *
* = These are car model specific features and are not available for all cars. 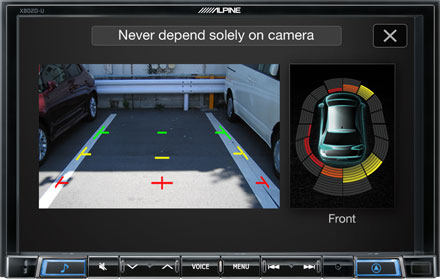 The reversing camera is an accessory that we definitely recommend. The camera image appears automatically as soon as you engage reverse gear, and you can select the cancel guides on the screen to make reversing even easier. Alpine offers a wide range of different bow and reversing cameras, some of which have angle changes directly from the Alpine touch screen. If you want, you can display the reversing camera and the car's original reversing radar screens at the same time. 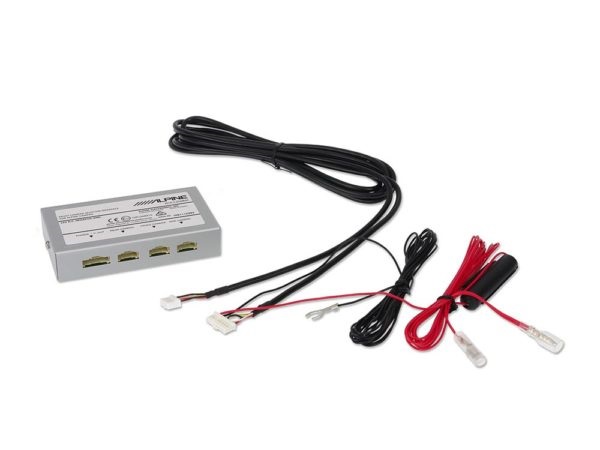 Connect up to three cameras!
The optional KCX-C250MC allows up to three cameras to be connected to the player. The cameras are controlled from the touch screen. Alpine has cameras for the bow, back and side, and you can also get cameras with a very wide angle, the angles of which you can change directly on the Alpine screen. 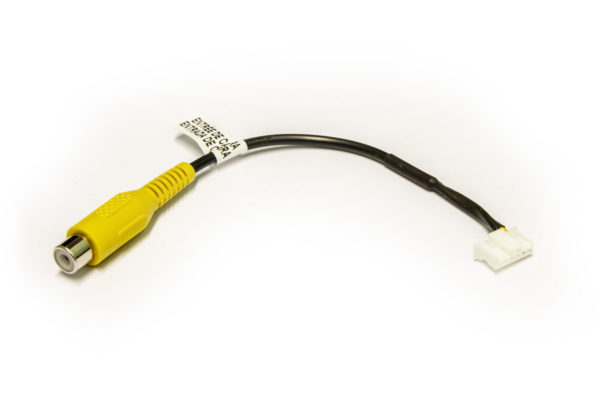